How to use classes in events

I’m trying to make events that will move objects that are part of a class individually. But I’m having problems trying to use commands to effect only one object at a time. I’m trying to simulate having lots of enemies on screen without having to do so much cloning since it’s rough on the performance.

Could somebody give me an explanation on what the commands “All in class…”, “Affected Object from Class…” and “Selected Instance…”. I feel like if I got a better understanding on how these worked I could figure it out. Please help. 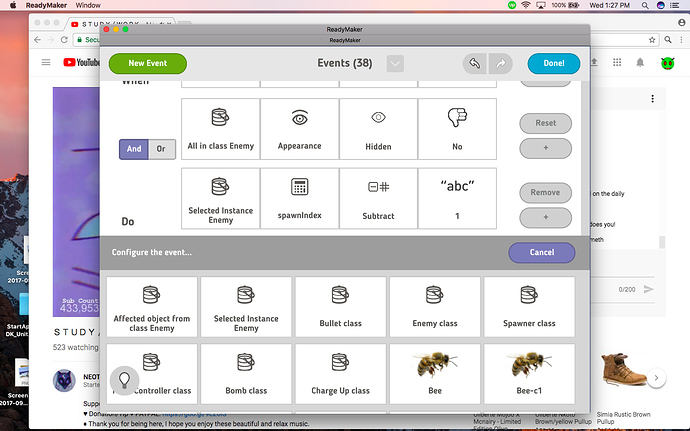 Make a sprite,
Give a Counter behaviour to the sprite,(set Counter value to 10)(Name HP)
Make a Class (Black) for the sprite,

Make some copies of the sprite,

WHEN all in class Black, Sensing,Touchdown
DO Selected Instance Black,HP,Subtract, 1

This is probably what you wanted to make individual health points for sprites.

For Hiding a copy when it’s counter = 0

Yes - this is a good answer, also you can set the parameter values for all objects when the scene starts.

“Affected” - we use this the method for one or group of objects with the same value. “Selected Instance” - we use when we need to select a specific object or objects with a variety of conditions.

Also, when you use cloning of objects, so that the scene is not overloaded, you can delete them after a certain time.