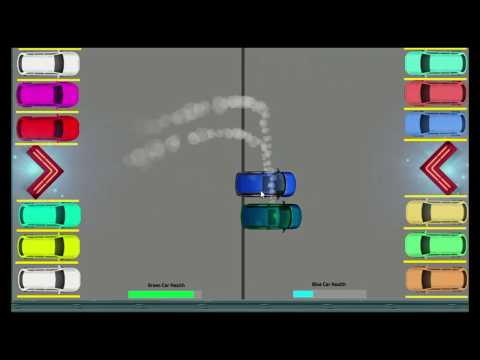 Battle for survival by enjoying gameplay with cars,and power ups...

Suggestions for next Car Showdown game series installments as I really need them to continue this game series (This will always get updated with new suggestions).

Will be updated when I get news set in stone.

When I promote my Car Showdown game I will be mentioning “Built using Ready Maker” in my upcoming posts.

I have sent off to game studios across Montreal to use Ready Maker is amazing free software.

I will be updating my OP on every new action I do or simply just reply to it within this thread.

I hope to play your game when it’s published.

We love to see other Ready users expand to such great heights like these!! We would love to say good luck

and we hope for the best for your games!!!

WOW!! Congrats James!! This is some awesome news!!!

Car Showdown will be FREE April 20th to April 22nd on Amazon Appstore & Google Play Store as part of my Easter Weekend Sale.

glad you contribute to that!

I need to create a intro loading screen for my game that will last 13 seconds for my 15 second black screen because it’s loading all of my in-game assets so until all of my game assets are loaded the screen will remain black.

Is there away to create a loading bar with an image of my game as a background and link them together but of course once my game is loaded to 100% players won’t be looking at a 15 second black screen.

Can I do this in Ready or I gotta do it in Unity?

Does it have to be a separate scene linked to my current scene that is loading all of my in-game assets?

I’m not removing any of my assets lol

Exactly what I want to do video example

Ready automatically loads things for you with the Ready app, that way you don’t need to code in anything to load.

However, whenever you transfer to unity- that feature goes away. The game itself has to load in a new scene alone.

Youll have to code in a loading scene via Unity I believe. 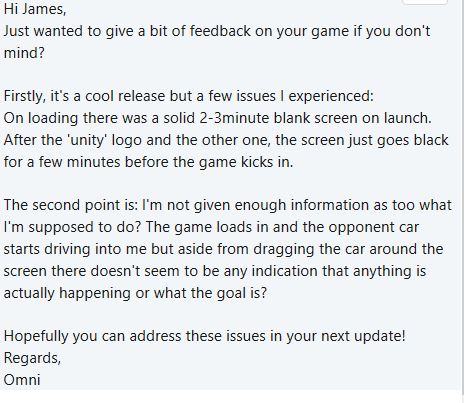 First bugs reported by a player.

Amazon & Google Testing team found none of these issues but I’m aware of everything expect for the blank screen & black screen he claims it’s 2-3 minutes but it only lasts 15 seconds on my end.

Rules of my game are listed in the product details of Amazon Appstore & Google Play Store.

Navmesh with the NPC crashing into the player off the start happens 1/20 times in repro unsure what’s causing this since Navmesh has to lowest repro in order to narrow down a bug fix in any game.

Just need help on the Blank & Black screen he will be sending me screenshots of these issues since I requested them.

I’m thinking of just creating an image in Photoshop and using that to go over the black screen for 13 seconds nothing animated or keyframe nothing crazy the image will just say “The game is currently loading this will only take a few seconds”.

For the loading screen, they may have a device that is lower-end. Super insane if it takes that long. I’m guessing it takes that long because if they’re using a low end device and there is nothing to load the game in, the software is trying to load in the game, with unity engine- along with Ready all at the same time.

For confused players, I recommend putting something in the game. Most people don’t read descriptions nowadays in my opinion

His device is a “Sony Xperia Z model”

I had no idea this phone existed until 15 minutes ago is it lower-end?

Because I was thinking it be lower-end and maybe 32 bit or something like that.

If it’s trying to load Ready & Unity all at the sametime I’m guessing there’s no real fix with this besides waiting…?

If you mean this device: 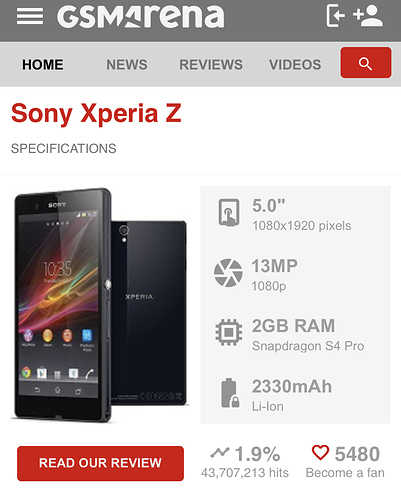 Then yes, very old model. This came out back in 2013. Very low end for today’s technology.

If there’s issues for older devices, then there’s honestly nothing to do when it comes to performance like that unless implementing a loading screen like you’ve been thinking about adding.

Fun question if this really old device waits forever to load a game how long should my Loading screen be without overlapping my game?

For S6-S7-S8 it’s all 15 second black screen that I tested across devices.

That black screen taking 2-3 minutes should definitely be from their device. What is the earliest android version the game supports?

With a loading screen, it just depends. All devices perform differently. There’s honestly no telling how long the loading screen should take. It should just load on its own.

9 I think is the latest for Android.

How about the earliest version? If a black screen takes that long after the watermark logos when you start the game- Ready could have a few performance improvements maybe, or support a more recent unity version to help with that of course.

4.1 Android is the lowest API it supports.

Pretty much whats causing this black screen is my game is loading all of it’s in-game assets until it reaches 100% but an older version of Unity maybe causing this also if I understand this correctly?

Oh, then I have misunderstood.

If it is on start, that’s just the game processing- correct!

Updating Unity should help for sure. They recently updated to 2019.1 and it’s amazing!!

But be aware- updating unity CAN cause your game to be completely ruined. Updating Unity needs to be a serious thought sometimes. If your game is messed up when you update, revert back to the previous version and try a different update.

Updating Unity should help with performance for sure!

My game Ball World 3D also has a black screen but it only lasts for 2 seconds and is 3D, so that’s kinda ironic if yours is 2D