This turned out ok, i really had fun!

I was not expecting this one to be much more than a chance to play with some assets i found. I am thinking i might code the enemy players to flee when they hit 50% health, but its already kinda fun. No pubg, but i am pretty happy with it because its mine.

Edited again to put the lastest version at the top. Not everyone scrolls thru the posts, and the old version was many changes ago.

An interesting game, I think you can work on it to make it even better.

Its not finished, i have lots of ideas for it. Thank you for the encouragment.

The lastest version has a lot of new ideas for me:

Player is affected by damage, causing slowed movement and visual damage.
Enemies retreat when wounded, and also have visual damage.
Multiple requirements for win/lose conditions. All enemies must be killed, and you cant run out of ammo.
Custom sounds and graphics. Meaning i used mostly stuff i had to import. I cant really make stuff yet, but using new resources was cool and helped a lot with creativity.

KNOWN BUGS
Enemy damage should render as blood splat, not drip…its coded* right, but never seems to play correctly. Makes a big visual difference too, the splat looks much better when it renders.
Bullets sometimes seem to hit for too much damage. I am tempted to call this a feature, like a ‘headshot’ or something. But i wish i knew why.
Scoreboard registers totals that shouldnt be possible. I scored 177 in a game when if all shots hit target, 60 points is max. But thats ok too, just wish i knew why.

Thanks again Ready for an excellent tool, cant wait to see it grow.

*i hope it is, lol. All the drop down boxes are right.

Hmm, i thought i had done that, but thank younfor the clarification on behaviour, now i know for sure

And just for further clarification, you mean:

Not object is sensing? Because sensing is the prior part of that type of logic statement, at least in the building blocks. Unless im not doing something else right? 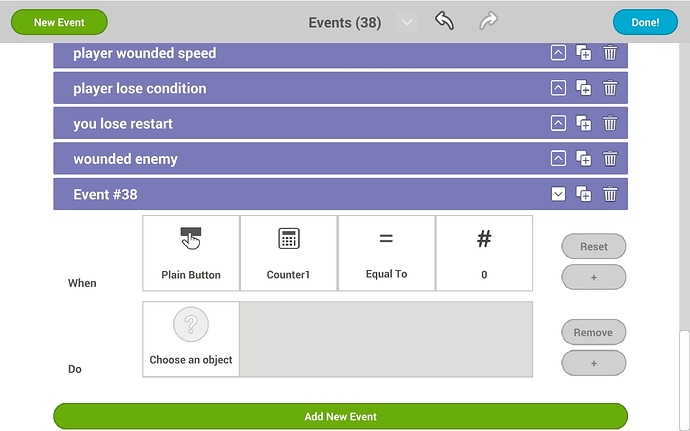 I had a question about this. I was trying to disable the fire button when its counter hit 0, but couldnt figure out a logic, and the building blocks offered no easy way out of this chain. I was going to add an object as a ammo refill, but couldnt stop the player ammo counter from going negative if the player kept mashing the button.
I ended up just making an empty clip (0 on the counter) just be a lose condition, but its not what i really wanted.
Could i approach it differently?

Thank you, it was indeed two instances of code where that mistake was the culprit.

I am making a new version, and it should be cleaner and more simplified.

I am going to just create one enemy, with all the behaviors, and then clone him into a random spot, rather than using 6 individual enemies. All the code duplication is no problem with a finished object, but making changes the way this is built meant digging thru 6 objects to make sure everything got done.

This is really fun. The learning, not the repeating. The repeating is horrible, so i want to learn more, lol.

If i can figure out the disable fire button when clip empty, i can add pickups for weapons.

I saw once in making a line of code that there was a way to change gifs on an object, which means i can have weapon pickups that also get a visible weapon change. If i ever figure out how to get these gifs into my editor.

I had a question about this. I was trying to disable the fire button when its counter hit 0

You can try use the “Hidden yes/no” in the Appearance parameter in the Event Manager:
Example:

I saw once in making a line of code that there was a way to change gifs on an object,

I hit about 50 lines of code, and maybe 25 objects…and the performance just went out the door. Its playable, but barely. Which is a shame, as the last few effects and items that went in sudd3nly made it a much more fun game.

Having to get the loot crates for ammo means you cant just rush in, my playtester lost a few rounds not watching his ammo. And the loot crate parachute cat shrinks and drops his crate properly, which is cute and exactly what i wanted.

I think a complete rebuild could produce the same game in about 28 or 30 lines, by cloning in the enemy rather than having 6 enemies and no clones. But arent there enough of these games on the market? Lol.

Just a note, all my games are built and tuned for phone not PC. My apologies to the pc users, but am cable and wire free, and tbh i havent needed the pc for anything yet, much love to the Ready guys for a mobile awesome.

Great music, great idea. But, the player and enemies are so small I can hardly see them. And they are too fast. If you zoom in or change the view it would be alot more fun.