Trying to make a simple space shooter. Just to learn and test some stuff.

Silly question really I want to play an explosion effect when missile collides with asteroid but when I mention in the event manager that asteroid / missile both disappear when they collide against each other the effect isn’t being played due to the asteroid already disapearing according to the system logic / mechanics.

How can I make the asteroid disappear upon collision with missile but still play explosion effect while vanishing?

Any advice would be extremely appreciated!

@ready any update guys on my question? Thanks!

You could make a sprite invisible with an explosion effect set offscreen.
When missile collides, make missile clone sprite.
Then destroy missile.
Destroy the clone after runtime of 1 or 2 secs.

Thanks so much for your prompt reply Suzzy need to test this one out. Never thought about it honestly. Seems like a workaround to me. Isn’t there a more straight forward way to achieve the same objective? Thanks!

, best of all it will work through two events: 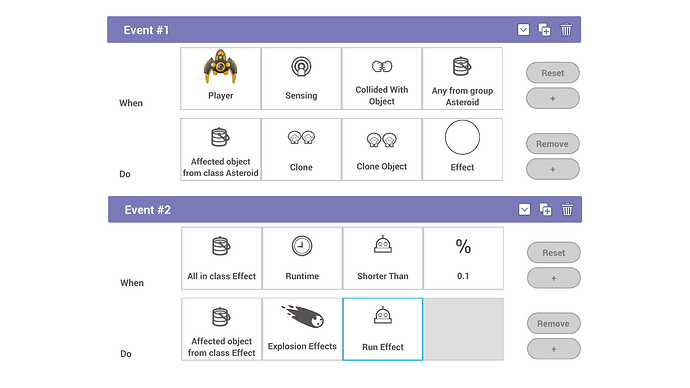 Another option is to place the effect on the player and play it in a collision with an asteroid, and then make the player transparent: 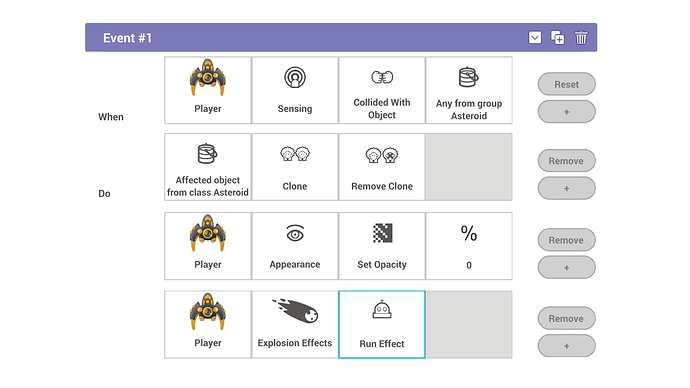 You can also shift the position to play the effect to the side:

Thank you both @Ready and @Suzzy-Grey you guys are truly awesome and very resourceful. I tried your recommendation and it worked like a charm! Thanks folks truly appreciate your help!