Can someone enlighten me as to how the depth-index controls (aka z-index, stacking order) work? At least that’s what I think they are based on the icons and the fact that once in a while they actually do send the selected sprite to the front or back, respectively. Most of the time, though, I just hear the error bell. 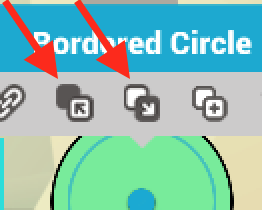 They work for me most of the time alright.
Are you using a mobile/tablet?
Maybe the icons are too small and difficult to tap on mobile devices

I believe that’s the in front of or behind when two sprites are on the same plain ( background, scene or user input)

Thanks for the replies! @kenobi, I see it not working even if I duplicate a sprite with the “+” icon, then try to change the stacking order. @Suzzy-Grey, I’ve seen it fail on several devices, primarily desktop devices with keyboard and mouse - Mac, Windows, Chromebook.

Your responses have me more puzzled than ever!

Thanks @Ready, that’s what @kenobi said too. I tried to make a demo to show you all what I mean but of course it worked perfectly

If I come across an example where it doesn’t work, I’ll post it here.